The tournament involved a group stage qualification and then went to a straight knock out format. Attending on the day was an official FIFA Game commentator and plenty of aspiring players.

After the memorable night, we had a raffle including amazing prizes such as a signed Munster Rugby jersey, Republic of Ireland soccer tickets for the Aviva stadium world cup qualifiers, an ipad and more fantastic prizes. 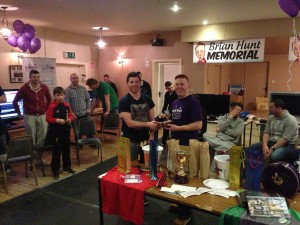 The eventual winner of the competition was generous enough to donate some of the prize money back to us for us to pass on to Temple Street.

The Brian Hunt Memorial Committee, Hunt Family and Friends would like to thank all who participated, the sponsors and all who made this a resounding success.